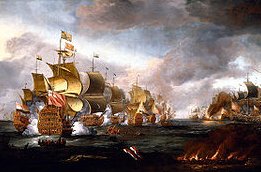 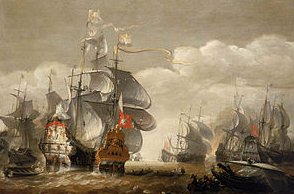 On 13th June 1665 a battle took place forty miles off the coast of Lowestoft. It was during the second Anglo-Dutch War. The Dutch were trying to prevent a second English blockade of their ports (the first was called off by England due to lack of supplies).

The two opponents were, at the time, struggling to dominate the shipping trade and lanes across the world.

The Dutch (Republic of the Seven United Provinces) fleet of more than a hundred ships, commanded by Lieutenant-Admiral Jacob van Wassenaer Obdam, attacked an English fleet of about the same size, commanded by James Duke of York.

The English victory, largely forgotten now, helped to set England up as a major maritime power. The Dutch, however, still remember it as their greatest ever defeat.

To find out more go to