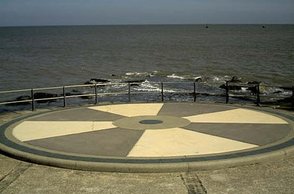 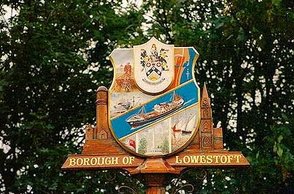 Lowestoft is a town in the English county of Suffolk. The town is on the North Sea coast and is the most easterly point of the United Kingdom. It is 110 miles (177 km) north-east of London, 38 miles (61 km) north-east of Ipswich and 22 miles (35 km) south-east of Norwich. It is situated on the edge of the Broads system and is the major settlement within the district of Waveney with a population of 64,358 at the 2001 census.

Lowestoft is situated on the south east edge of the Broads. The word Broad is derived from the Anglo Saxon Braedan (to spread out or broaden), and is the word commonly used in Norfolk and Suffolk to describe areas of wetland which have been expanded by medieval activity such as peat digging and locally formed small lakes.

Lowestoft was called Lothuwistoft in the Domesday Book.

Lowestoft’s name is derived from the Viking personal name Hlothver, and toft, a Viking word for 'homestead'. The town's name has been spelt variously: Lothnwistoft, Laistoe, Lestoffe, Loystoft and Laystoft.

Lowestoft has been host to all sorts of creatures, including Ichthyosaurus, Tyrannosaurus Rex, Megatherium (giant sloth) and Woolly Mammoth. You can see the bones of some of them at the museum.

After crossing Europe and the now sunken continent known as Doggerland, early humans arrived in Pakefield near Lowestoft 700,000 years ago and the 30 flint tools found there represent the earliest record of human activity found so far in Northern Europe.

Lowestoft’s social development as a coastal resort occurred a generation later than what has been observed in other places, with the first bathing machines being placed on the beach in 1768, but it was only one feature of which note should be taken.

Of equal importance was the building of an assembly room c. 1760 at The Queen’s Head inn, in Tyler’s Lane (now Compass Street), and the starting of a book club in town – cultural advances which were reinforced by the construction of a new turnpike road.

This facility linked Lowestoft with Great Yarmouth, an important regional centre, and led to the provision of a mail-cart (which passed through the town twice daily with letters to and from London) and to a daily stagecoach service with the capital.

It is, therefore, no coincidence that a porcelain-making venture should have begun at a time of such social innovation.

The town had a population of about 1,800-2,000 people and was self-governing by means of its manorial court and parish vestry (it did not receive a charter until 1885 – the result of a great increase in population, following the coming of the railway and the expansion of the harbour forty years earlier). It had a complex occupational structure, with a wide range of trades, and it served as the market-town for the local area – though with much of its total economic effort devoted to maritime trade and herring fishing. Lowestoft occupied a cliff-top site, with the soft cliff-face itself terraced to make it usable and with the wide beach below accessed by a number of steep tracks known as scores. It had one main street (containing the principal houses, inns and shops), about 1,000 yards in length and with a slight sinuosity caused by following the line of the cliff – and there was a fifty-foot drop over that length from north to south. To the west of it lay an area of densely-built smaller houses and workshops, set out on a grid of cross-lanes. The whole built-up area covered about sixty acres and there were around 400 dwellings in all. Some contemporary opinions of the town were not flattering, while others were more laudatory. Much would have depended, of course, on the individual commentators and their criteria for judgement.