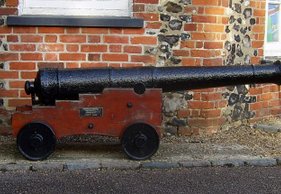 Lowestoft has had cannons of different kinds for defence, since about 1660.

Between the years 1774 – 1783 Lowestoft had been issued with four 32 pounders, and South Lowestoft with 32 pounders from the Board of Ordnance for coastal batteries. Lowestoft had one company, called Standish's Company, of gunners. Their headquarters were at Woolwich, they were stationed at  Lowestoft.

Outside the Lowestoft Museum Broad House is displayed a cannon, known as a Minion Largest, from about 1685 – 1710.