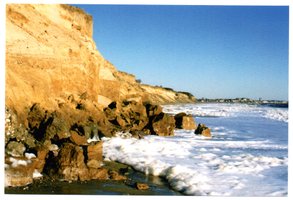 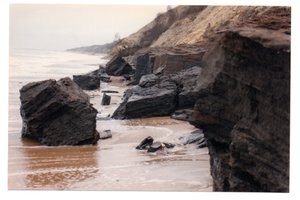 One wintry day, two keen fossil collectors found a flint beneath these cliffs.  It didn’t look much, but it turned out to be evidence for the earliest humans in Britain.  Mike Pitts on the amateur archaeologists who rewrote history.

Given the choice, the bottom of a cliff with the tide coming in fast is not a place you’d work.  For Paul Durbidge and Bob Mutch, however, the foreshore at Pakefield, south of Lowestoft, Suffolk, is precisely where they want to be.  Especially in winter, and even more so when the storms are up.  Because it’s then that the fossils are exosed.

Durbidge and Mutch have been collecting on this beach for years; they have assembled a huge and academically valuable collection of animal bones.  In 2000, though, they heard that along the coast in Norfolk, someone had found a flint hand axe that was 500,000 years old.  It would have been made by a distant ancestor of Neanderthals, and as far as Britain was concerned, was as old as early humans got.  This gave Durbidge & Mutch an idea.  They knew their animal fossils from Pakefield were older than that.  What if we have flints here too, they thought?  “We had a gut feeling about Pakefield,” says Durbidge.

Late in 2001, they hit the jackpot: during an excavation, they found a small flint flake.  To the uninitiated, it’s just a chip of stone, the sort of thing you might prise off of your sandal.  But the two friends saw it for what it was: a diamond amid dross.  That little chip of flint had been shaped by the hand of one of the very first Europeans.

The journal Nature announced the discovery of 700,000-year-old stone tools in Suffolk – pushing back the date of arrival of early humans in northern Europe by 200,000 years.  Buried in the list of 19 authors were the names of Mutch and Durbidge.

While their address was given as Lowestoft Museum, they are not on the staff: in a great British tradition of “amateur” scientists and explorers, Mutch and Burbidge are unpaid and answerable to no one.  Without them, the flints might never have been found.  In our regulated, budget-driven world, it turns out that it’s still possible for the independent visionary to rewrite history.

There is a dark layer of clay that can be seen intermittently along the coastal cliffs of Norfolk and Suffolk, and it’s known as the Cromer Forest bed Formation.  It got its name from ancient tree stumps, and for over 200 years has been popular with collectors for its copious fossils – mammoth, sabre tooth cat, bison and other exotic creatures.  Pakefield was famous for fossils a century ago, but until recently the shore was covered with debris and little more could be found.

The coast south of Lowestoft is Bob Mutch’s patch.  He began collecting fossils, h says, as a youngster in the Southwold area.  He knew the history of Pakefield and kept an eye on it.  Then in 1994, there as a big storm.  “Then the proverbial hit the fan,” he says in his soft accent, “There was tons of material everywhere.”

During a big winter storm, the beach can disappear for a period – suddenly the ground drops by several metres.  On those rare occasions when everything goes right, ancient gravel-filled river channels are exposed, packed with animal bones.  Mutch describes running about, picking up fossils in a frenzy while the tide rolls around and cliffs slump into the waves.

In 2000, a group of scientists found a worked flint at Pakefield – but it was not in situ; it was loose, rather than embedded in the clay, and therefore couldn’t be dated.   Mutch and Durbidge, already buoyed by the news of the Norfolk hand axe, knew they’d need to be better.

So, starting in late 2001, Durbidge and Mutch excavated small sections at the bottom of the cliff.  They were thorough.  “We gave to map it all, take the photographs, systematically scrape the surface, sieve, wash and sort,” says Mutch.  He’s not as fit as he was, and an assistant, Adrian Charlton, does the spadework.  “He stands up to his knees in cold water,” says Mutch.  “Works his backside off.  He loves sieving.”

Then came the flint.  “It was pure luck,” says Durbidge.  “We’d done three small sections, and we found our first flint flake.”

They sent it to the Natural History Museum and got an excited letter back: “You appear to have hit the jackpot.”

In 2003, a small team that included members of the Ancient Human Occupation of Britain (ahob), a project involving scientists from institutions across the UK, came to Pakefield to excavate.  They were helped – and watched closely – by Mutch and co, keen to have their discoveries vindicated.

Simon Parfitt, small-mammals expert at the Natural History Museum and University College London, had also been looking for signs of early humans on the East Anglian coast.  In 1998, he’d found the very first, ironically on a bison bone that had been in the museum’s collection since 1897.  The bone had microscopic cuts on it, that could only have been made by a flint butchery knife: unfortunately, it was not sealed in the clay layer.

His quest, like that of Durbidge and Mutch, had brought him and Ahob to Pakefield.  Not only was he hoping for flints, but also the supportive evidence that large mammals had been defleshed with stone tools.  He wanted the bones of a butchered mammoth.

Parfitt and colleagues sieved everything they dug up, some of it in the lab in London, and over the next few months sorted the thousands of tiny fragments under a microscope.  “There was a huge quantity of small mammals, “ he says, including such exotics as “a very rare extinct aquatic shrew”, bats, squirrels, hamsters and, most significantly, the vole species known to have died out some 700,000 years ago.  No butchered beasts yet, but they were now confident of the great age, the association with flint tools and the nature of the landscape and fauna at that remote date.

For these flints – they total 32 now – prove humans to have been there, but it’s the animal bones, plant remains, beetles and sediment studies that allow us to picture what it was like.  What would it be like, then?  Tony Stuart, a leading specialist in ice-age mammals at the University of Durham and UCL, says that at first you would think you were in modern Britain as it might be if it was still wilderness, with broadleaved woodland opening on to marsh around a meandering river rich with pike, tench and rudd – though you might feel a little warm.

His quest, like that of Durbidge and Mutch, had brought him and Ahob to Pakefield.  Not only was he hoping for flints, but also the supportive evidence that large mammals had been defleshed with stone tools.  He wanted the bones of a butchered mammoth.

However, he says, “in a short while, familiarity would have given way to astonishment.”  As a lion roared and hyenas whooped, a mammoth would crash through the undergrowth on its way to the river, upsetting the hippos sunning themselves on the bank.  The roster of creatures would make a theme park drawl with envy: an extinct giant beaver, wild boar, three different extinct giant deer, a giant moose, an extinct bison, two species of horse, an extinct rhino, the enormous straight-tusked elephant (larger than any elephant alive today) and the mammoth itself, an ancestor of the (smaller) woolly mammoth of the later ice ages.

There were humans out there, but so few as to be almost unnoticed.  The animals’ chief concerns were the more vicious carnivores; lion, spotted hyena (Durbidge and Mutch have found not just bones, but droppings too), wolf, bear and the spectacular sabre tooth cat.

In fact, humans were so rare, it’s normal in such work to find a huge range of animals but no fossil hominins.

And what were these early humans like?  Well, they predate Neanderthals by hundreds of thousands of years, but still would have been much more like us that our closest living relatives today, the chimpanzees.  At Boxgrove in West Sussex a few fossils have been found of Homoheidelbergensis, dating from 500,000 years ago.  Pakefield hominins may be their ancestors, and ultimately the Neanderthals’ too – it’s thought that, some 15,000 years ago, the lineage died out.

Durbidge and Mutch have mixed feelings about publicity, little surprise given the history of occasional mistrust, not just between professional and amateur archaeologists, but professional and professional too.  Media coverage of the 700,000-year-old humans last month inevitably focused on the sponsoring institutions – 15 alone listed in Nature – rather than the Suffolk men.  Although they spoke to me for this article, Mutch and Durbidge later decided that did not want to be photographed.  Their work at the cliff face is not yet over, and they fear attracting undue attention to it.

“It’s the science that’s important”, says Mutch, “not us”.

The fact is, though, that it’s men and women like them who have helped to write our early history and will continue to do so.

The Suffolk flints may not look like much, yet their context launches them on to the stage of British history.  The implications are huge.  If evidence for hominids 700,000 years ago could be missed for 200 years in a part of the world with probably the highest density of collectors and scientists, what might we yet find, in older deposits here and elsewhere?