HMS Lowestoft, the last of the Rothesay class of anti-submarine frigates to be built, was commissioned at the Glasgow shipyard of Alexander Stephen and sons, on 18th September 1961 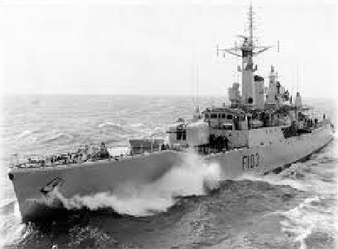 The seventh of a line of small fast ships of the same name, the Lowestofts have served in the Royal Navy from 1697 to 1985 and have distinguished themselves in action.

Lord Nelson served as Lieutenant for two years in the fourth Lowestoffe, a 32-gun frigate built at Deptford  in 1761, on the first obtaining commission in 1777.

She had a complement of 15 officers and 220 men. She combined excellent sea-keeping qualities, modern gunnery and anti-submarine weapons.

The last HMS Lowestoft was sunk on the 8th June 1986 by a single Tigerfish Torpedo, fired from HM Submarine Conqueror.

Conqueror was pretty good at hitting its target, as it also sunk the Argentinian Belgrano during the Falklands conflict.

Apparently it was the last time a ship was sunk showing its pennant number. [Lowie target practise]

It is now common practice to remove pennant numbers and sink the warships anonymously, as a mark of respect to those who sailed in them. 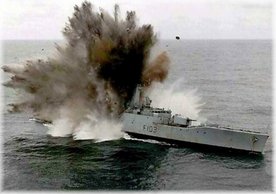 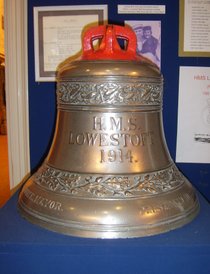